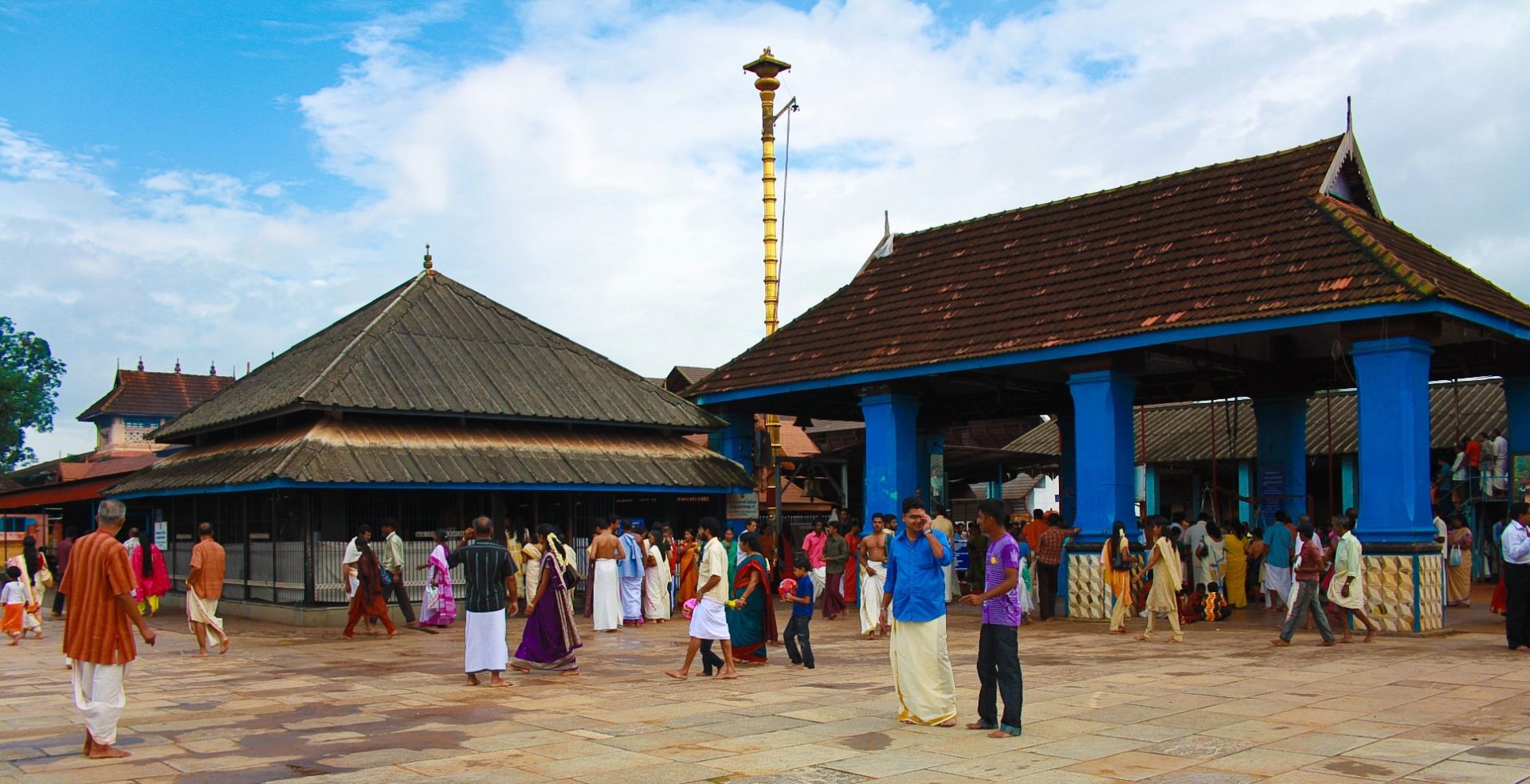 The Chottanikkara (correction of Jyotiannakkara) Devi Temple is a famous temple of mother goddess Bhagavati. She is a form of Mahalakshmi.she is believed to be residing in Chottanikkara along with her husband Maha Vishnu. The temple is located at Chottanikkara, a southern suburb of the city of Kochi in the state of Kerala, India and is one of the most popular temples in the state. In terms of temple architecture, Chottanikkara temple stands out to be an ultimate testimonial for the ancient vishwakarma sthapathis (wooden sculpture) along with Sabarimala temple. Sree Mahamaya Bhagavati (Adi Parashakti), the goddess of saraswati, Lakshmi and Parvati is one of the most popular deities in Kerala and the supreme mother goddess in Hinduism. Chottanikkara Devi (Melekavu Bhagavathi) is worshiped at the temple, in three different forms: as Mahasaraswati in the morning, draped in white; Mahalakshmi at noon, draped in crimson; and as Mahakali in the evening, decked in blue. Goddess ‘Keezhkkaavu bhagavathi’ is believed to be Bhadrakali, in her fierce form of her or Ugra form of her. Bhadrakali, is a form of mother Kali, supposed to be born from the third eye of Lord Shiva, to kill the demon king Darika. People suffering from mental illnesses and commonly visit the temple, as Chottanikkara devi is said to cure her devotees of her. Guruthi pooja is a ritual done at late evening to invoke goddess Mahakali. Earlier ‘Guruthi Pooja’ was done only on Fridays. But nowadays, it is performed every day.

The area in which the temple is located was once a dense jungle that is said to be infested with yakshis and raktharakshas. A tribesman named Kannappan used to live in this forest. He was a devout worshiper of Kali and ritually sacrificed a buffalo to her every Friday (Goddess day). One day, he found a calf near the forest. He kidnapped the calf and took it to his stone altar. Just before the calf was sacrificed, the tribesman’s daughter, Pavizham, intervened and pleaded with him to stop the sacrifice. The man loved her daughter and so he allowed her to have the calf as her pet. Unfortunately, Pavizham died a few days later, possibly from a snake bite. Kannappan burst into tears and decided to cremate her body. To his surprise, the body of his daughter disappeared. A nearby priest told him the reason for such an event; Kannappan used to forcibly take the young calves from his mothers and slaughter them. As punishment, he suffered the same fate when his daughter died. However, when the tribesman searched for the calf, he found a glowing sacrificial altar in its place. The priest again tells him that the calf was actually divine and represented the divine couple, Vishnu and Lakshmi, and that he would pray before the altar every day and be forgiven for what he had done in the past.

Since Kannappan’s death, the stones were forgotten. The stone was accidentally rediscovered by a low-caste lawnmower, who discovered that blood was oozing from a stone that she had accidentally cut. Only it was a stone, but then it started to bleed. Horrified by what she saw, she brought the matter to the attention of the public. A nearby priest was called to solve the problem. After devaprasnam, it was concluded that the stone was divine. On that day, the old brahmin of the Yedattu household came with some puffed rice in a coconut shell and offered it to the Goddess for the first time. Even today this system of offering puffed rice in a coconut shell continues. The Brahmins of the Yedattu house became hereditary priests in this temple from those days.

Another legend associated with the temple was that of the spiritual leader Shankaracharya. During the time he lived, Adi Shankara realized that there was not a single temple in Kerala that signified the worship of Goddess Saraswati. As a result, he himself went to Kashmir and meditated for many days so that the goddess would appear before him. His meditation paid off and before him was the incredibly beautiful goddess, dressed in red. On being asked, he said that he would like to take the goddess to Kerala and establish a temple dedicated to her worship. In this way, the people of Kerala would not have to go so far to worship her, as in the case of the old men and elders. After much persuasion, the goddess agreed; she would follow him on foot wherever he went, but only on one condition. If he trusts her, then he wasn’t allowed to look back to see if she followed him or not. If she did, then he wouldn’t go any further. He accepts and they continue walking. They were walking through the Kodachadri hills, with Shankara in the lead and the goddess’s anklets jingling and letting him know that she was with him. After walking a certain distance, the tinkling suddenly stopped. Shankara waited a few moments and glanced quickly back to find the goddess still with him, looking at him reproachfully. In accordance with the condition, the goddess stopped right there. This is the place that would turn out to be the Mookambika temple. Shankara, however, was not one to give up. He apologized profusely for breaking the condition and repeatedly pleaded and pleaded with the goddess to come with him to Kerala. After many pleas, the goddess agrees to a compromise and arrives at Chottanikara in Kerala, where the Chottanikara temple was located.

From the early hours of the morning, the goddess would come and appear before the devotees in the Chottanikkara temple. Then, in the afternoon, she would go back to the Mookambika temple (where she stopped). Since then, the Chottanikkara temple shrine gates were opened during the early morning hours in honor of the worship of Goddess Saraswati before the Mookambika temple main shrine gates were opened.

The annual Chottanikkara Makam Thozhal is the main festival at the Chottanikara temple. It is believed that it was on this day (mithuna lagna in Makam) that Vilvumangala Swamiyar saw the goddess in the temple and devotees worship the goddess at this time.

On the day of Makam Thozhal, the ritual bath of the goddess in the morning in the sacred Calli Onakkuttichira pond on the north side of the temple. After that, the goddess is taken to the temple accompanied by Lord Sastha on the backs of seven caparisoned elephants that march towards the “Pooraparambhu”, the traditional viewpoint where they stay until 11 a.m.

At noon the door of the Sanctum Sanctorum is closed for Ucha pooja. And it reopens at 14:00 for the “Makam Darsanam”, the time when Vilvumangala Swamiyar saw the goddess in the temple. At that time, Devi, appearing in her holy splendor and glory, arrayed in her sacred golden ornaments, precious jewels and innumerable garlands. This is exactly the form of vision Villwamangalam Swamiyar is believed to have had when he looked west after Kizhukkavu Bhagavathy’s “Prathishta”, Chottanikkara Devi appears at this time dressed in glittering clothes, glittering ornaments and fine jewelry with her four arms bearing varam , Abhayam, Shank and Chakram (Offering gift and refuge) to his ardent devotees. It is fervently believed that Darsanam at this time will result in the fulfillment of all cherished prayers and wishes. It is fervently believed that those who obtain Darsanam in this crucial Mithuna Lagna, will be blessed with the fulfillment of their longstanding wishes and prayers.