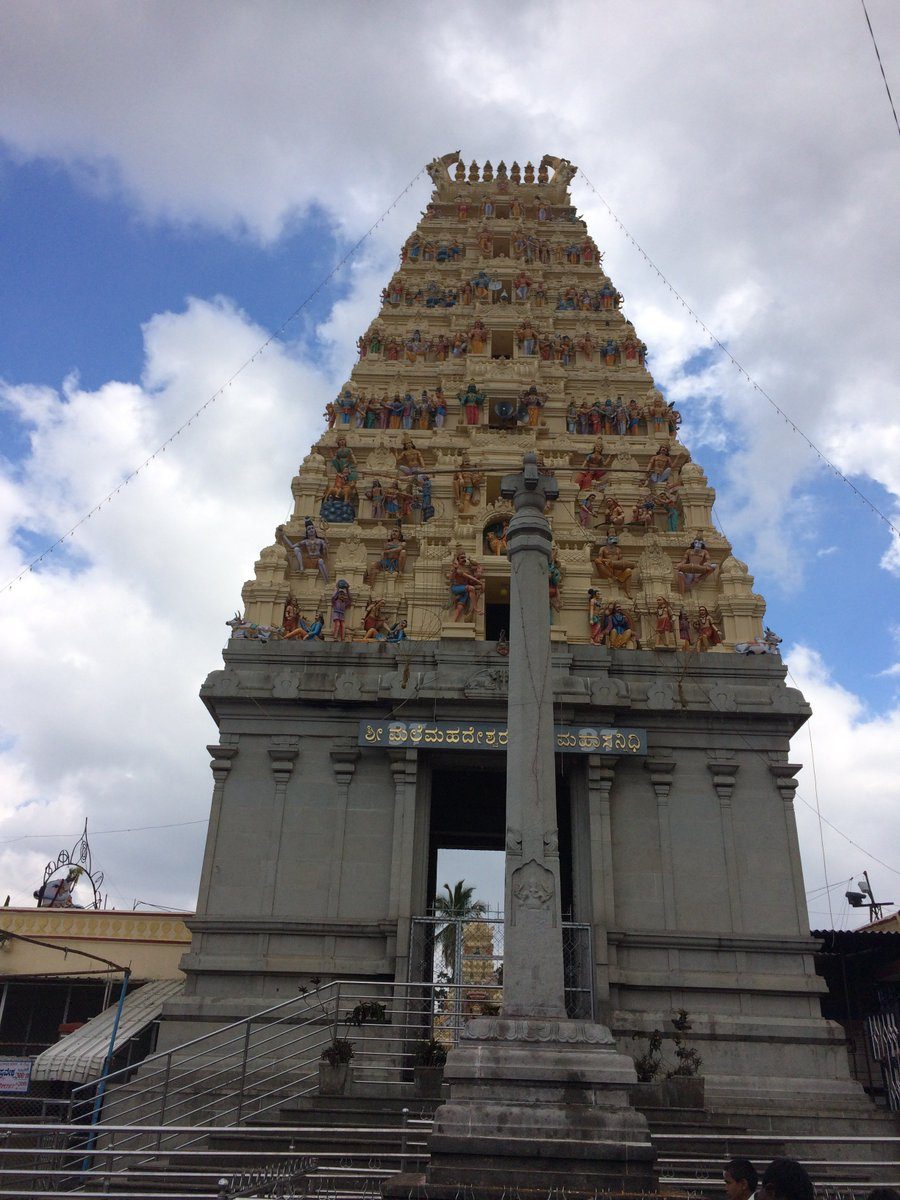 Male Mahadeshwara Betta is a pilgrim town located in Hanur taluk of Chamarajanagar district in southern Karnataka. It is situated about 150 km from Mysuru and about 210 km from Bengaluru. The ancient and sacred temple of Sri Male Mahadeshwara is a pilgrimage center where Mahadeshwara lived, practiced medicine as a Sidda, taught ahimsa to people in and around the seven hills. It attracts lakhs of pilgrims from the states of Karnataka and Tamil Nadu. The area around the current temple is 155.57 acres (0.6296 km2). Additionally, the temple holds land in the villages of Talabetta, Haleyuru and Indiganatha. In the middle of a dense forest, the temple attracts not only pilgrims but also nature lovers. The height of the hill is about 3000 feet above the sea.
Lord Sri Mahadeshwara is believed to be the incarnation of Lord Shiva. Historical evidence suggests that the Saint Mahadeshwara must have lived during the fifteenth century. About 600 years ago, he came here to do penance and it is believed that he still does penance at the Garbha Gudi of the temple in the form of a Linga. The Linga, now worshiped in the Garbha Gudi, is a self-manifested one (swayambhu). Sri Male Mahadeshwara Swamy moved around on a tiger known as Huli Vahana (Tiger like vehicle) and performed a series of miracles around the Betta to save the people and saints who lived there. Miracles of Lord Sri Mahadeshwara are sometimes sung by the townspeople in Janapada style.

According to legend, Male Mahadeshwara was born in the Kali Yuga to a light-skinned woman known as Uttarajamma and Chandrashekhara Murthy from the Adi Jambava community.

He was spiritually guided by the then pontiff of Suttur Mutt and Kunthur Mutt (Lingayat Mutts). The young saint is supposed to have come from Srishaila to this part of the state. It is said that he performed several miracles in his life, in these places. Then it is said that he went to the hills of Male Mahadeshwara. It is an area of ​​dense forest surrounded by seventy-seven peaks in seven circles. It was not a safe place for human habitation. It was about six centuries ago that the young saint entered the forest area to save the saints who were doing penance and they were taken captive by an evil king known as Shravana who possessed abundant power of black magic. Aside from this, there were tribes living here and there in small groups that lacked any ray of human civilization. Sri Mahadeshwara is said to have destroyed the black magic power of Shravana and freed the saints who were in prison from him. The place where they were held captive is also a holy place, called Thavasere and the place where Shravana lived is called Shravana Boli.

According to tradition, there are seven peaks identified in legend: Anumale, Jenumale, Kanumale, Pachchemale, Pavalamale, Ponnachimale, and Kongumale. These seven peaks together form the Male Mahadeshwara Betta. The holy Lord Mahadeshwara is said to have established a Mutt here to take care of the religious and cultural affairs of the people of this area. It is also said that, through his miracles, he enlightened and uplifted the hill tribes and made them his disciples. People coming from these families have become hereditary ‘Archakas’ of the Mahadeshwara temple. The temple was under the control and management of Sri Salur Mutt established by Lord Mahadeshwara himself until it was handed over to the Madras Government in the year 1953. After the formation of the state of Karnataka, the administration of the Temples is in charge of the trust committee, appointed by Karnataka government under Muzrai department.

Male Mahadeshwara Hills has become a tourist destination in the Chamarajanagar district. The top of the hill is well developed with paved paths and tile trails. There are villas that visitors can rent during their stay. There are many shops selling curios and pooja items.

About 50 years ago there were no roads to this place. People used to reach the place on foot. Currently, there are road connections from Karnataka and Tamil Nadu. More than 100 buses ply this route every day.

There are several places of historical interest in this area that are often visited by devotees. A pilgrimage to the Male Mahadeshwara temple also includes a holy bath in the Antaragange.