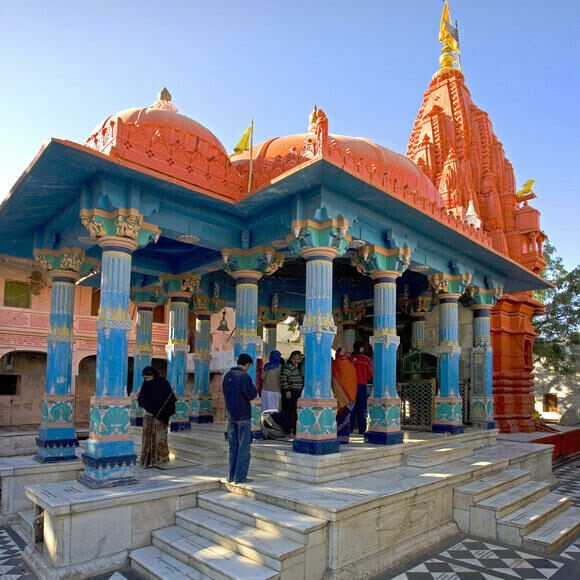 Jagatpita Brahma Mandir is a Hindu temple located in Pushkar, in the Indian state of Rajasthan, near the holy lake of Pushkar, to which its legend has an indelible link. The temple is one of the few extant temples dedicated to the Hindu creator god Brahma in India and remains the most prominent among them.

The structure of the temple dates from the 14th century, partially rebuilt later. The temple is made of marble and stone slabs. It has a distinctive red pinnacle (shikhara) and a hamsa bird motif. The sanctum sanctorum temple has the image of four-headed Brahma and his consort Gayatri (goddess of the Vedas). The temple is ruled by the priesthood of the Sanyasi (ascetic) sect. At Kartik Poornima, a festival dedicated to Brahma takes place when a large number of pilgrims visit the temple, after bathing in the holy lake.

Pushkar is said to have more than 500 temples (80 are large and the rest are small); Of these, many are ancient that were destroyed or desecrated by Muslim depredations during the rule of the Mughal emperor Aurangzeb (1658-1707), but were later rebuilt; of these, the most important is the Brahma temple. The structure dates from the 14th century. The temple is described as being built by the sage Vishwamitra after the Brahma yagna (ritual). It is also believed that Brahma himself chose the location of the temple for him. The 8th century Hindu philosopher Adi Shankara renovated this temple, while the current medieval structure dates to Maharaja Jawat Raj of Ratlam, who made additions and repairs, although the original design of the temple is preserved.

Pushkar is often described in scriptures as the only Brahma temple in the world, due to the curse of Savitri (Saraswati), and as the “King of the holy places of the Hindus”. Although now the Pushkar temple is no longer the only Brahma temple, it is still one of the few extant temples dedicated to Brahma in India and the most prominent dedicated to Brahma. International Business Times has identified Pushkar Lake and the Brahma Temple as one of the ten most religious places in the world and one of the five holy pilgrimage sites for Hindus in India.

The temple is visited by pilgrims and also by holy and sage men, after taking a ceremonial holy bath in Pushkar Lake. It is also a practice that a visit to the Brahma temple is followed by the worship of his consort Gayatri, followed by visits to other temples as appropriate.

The temple is open for worship from 6:30 a.m. to 8:30 p.m. during the winter and from 6:00 a.m. to 9:00 p.m. during the summer, with an interval in the afternoon between 1:30 p.m. and 3:00 p.m. pm when the temple is open. closed. Three artis are performed in the temple: Sandhya arti at night, about 40 minutes after sunset, Ratri Shayan arti (night sleep arti) about 5 hours after sunset, and Mangala arti in the morning. , about 2 hours before sunrise.

The Brahma temple priests refer to a strictly followed religious practice. Heads of families (married men) cannot enter the sanctum sanctorum to worship the deity. Only ascetics (sanyasis) can perform puja to the deity. Therefore, all the offerings of the pilgrims are given, from the outer hall of the temple, through a priest who is a sannyasi. The temple priests, generally in Pushkar, belong to the Parashar gotra (lineage).

Once a year, on Kartik Poornima, on the full moon night of the Hindu lunar month of Kartik (October-November), a religious festival is held in honor of Brahma. Thousands of pilgrims come to bathe in the holy Pushkar lake, adjacent to the temple. Various rites are also performed in the temple during the fair. The day also marks the famous Pushkar Camel Fair, which is held nearby. Special rites are performed on all poornimas (full moon days) and amavasyas (new moon days).

The temple, which is located on a high pedestal, is accessed via a series of marble steps that lead to an archway from the entrance door, decorated with a canopy of pillars. The entrance from the door leads to an open-air colonnaded room (Mandapa) and then to the sanctum sanctorum (Garbhagriha). The temple is built of stone slabs and blocks, joined together with molten lead. The temple’s red shikara (needle) and the symbol of a hamsa (swan or goose), Mount Brahma, are distinctive features of the temple. The shikara is about 70 feet (21 m) tall. The hamsa motif decorates the main entrance door. The devotees (with their names inscribed) have embedded hundreds of silver coins in the marble floor (in black and white squares) and on the walls of the interior of the temple as a mark of offering to Brahma. There is a silver turtle on the mandap, which is displayed on the floor of the temple in front of Garbhagriha, which is also built in marble. The marble floor has been replaced from time to time.

The central icon of Brahma (murti) made of marble was deified in garbhagriha 718 AD by Adi Shankara. The icon represents Brahma, sitting cross-legged in the creation aspect of the universe (the form of Vishvakarma). The central image is called chaumurti (“four-faced idol”). It is life-size with four hands and four faces, each oriented in a cardinal direction. The four arms hold the akshamala (rosary), the pustaka (book), the kurka (kusha herb), and the kamandalu (pot of water). Brahma rides on his mount, the hamsa. The four symbols that Brahma holds in his arms (the rosary, Kamandalu, the book, and the kusha herb sacrificial instrument) represent time, the causal waters from which the universe emerged, the knowledge, and the sacrificial system that will be adopted for the sustenance of the diverse forms of life. shapes in the universe. The image of Gayatri sits alongside that of Brahma in the center to his left. Sarasvati sits to Brahma’s right, along with other deities from the Hindu pantheon. Images of the peacock, the mount of Sarasvati, also decorate the walls of the temple. Also in the temple are images of the preserving god Vishnu, life-size dvarapalas (guardians), and a golden Garuda (eagle-man, Mount Vishnu).