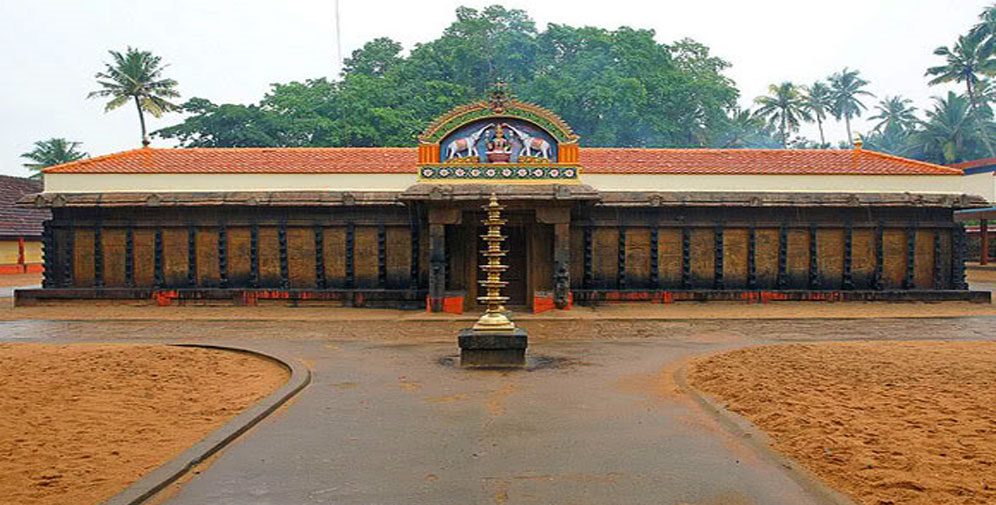 The Janardana Swami Temple is a 2,000-year-old temple situated in the Varkala township of Trivandrum. It is also known as Varkala Temple. Janardana Swami is a form of Lord Vishnu. It is a well-known temple in Kerala about 10.9 km west of Kallambalam on NH 66 near the sea, 25 km north of Thiruvananthapuram city, 8 km south of the famous destination Kappil and 2 km from the railway station. from Varkala, 14 km northwest of Attingal municipality. It is situated near the coast of the Arabian Sea. It is known as Dakshin Kashi (Southern Benares). The temple is located near the Varkala beach, which is considered to have medicinal properties as the waters wash nearby medicinal plants. It is also a major Ayurveda treatment center. The temple has an ancient bell taken from a shipwreck, donated by the captain of the Dutch ship that sank without causing any casualties near Varkala.

Varkala, an emerging seaside city of Trivandrum, also known as Janardanapuram or Udayamarthandapuram or Balit, is a sacred pilgrimage center situated in Trivandrum and is famous for its ancient Vishnu temple, popularly known as Janardana. In Sri Maha Bhavatham, it is mentioned that Balarama, the elder brother of Sri Krishna, visited this shrine during this pilgrimage to Kanyakumari temple and some other temples in the south. It is also known as ‘Gaya of the South’. Varkala has many local attractions and attracts hundreds of pilgrims and visitors throughout the year.

Sage Narada, after paying his respects to Lord Narayana, left Vaikuntam to see Brahma. Enraptured by Narada’s sweet music, Narayana followed him unobserved. When Narada reached Brahmaloka, Brahma saw Narayana following his son Narada and offered him greetings, whereupon Vishnu, realizing the awkward situation, suddenly disappeared. Brahma discovered that the person whom he had revered was his own son, Narada. The ‘Prajapathis’ who laughed at this incident were cursed by Brahma to be born on earth and suffer the miseries of human beings. Narada advised them to do penance at the place he himself would select for them. Narada threw his ‘Valkalam’ (bark upper garment) into the air and on the spot where he fell, they consecrated a temple for Janardanaswamy (a name of Vishnu). Thus the name Varkala is a corruption of ‘Valkala’, but the name came into prominent use.

The Sri Janardana temple is situated on top of a plateau by the sea. It is located on one of the tops of the hills, which is reached by a long and tiring staircase and one feels tired when arriving at the feet of the Lord. At the entrance to the inner sanctuary are the idols of Hanuman and Garuda on each side and in the main sanctuary is the idol of Sri. Janardana with Sri Devi and Bhoo Devi. The Janardana temple is a fine example of Kerala art and architecture. The circular ‘Sanctum sanctorum’ topped by a conical cupola of copper sheets, the square ‘mandapa’ with beautiful Navagrahas woodcarvings on the ceiling and copper ceiling, the quadrangular enclosures (prakara) around it, a hall containing a ‘bali peetha’ in front of the inner temple are the characteristic features of Kerala’s architectural style. The construction period of this temple saw the rise of a highly ornate temple. One of the inscriptions indicates that the temple was improved during the reign of Umayamma Rani, who ruled this region during 1677-84 AD The main idol has a striking appearance with four arms bearing all the attributes of Vishnu In the south-west corner and in the Northeast side of the outer enclosure are the shrines of Sasta and Shiva with Nandi.

To the scientist, Varkala is well known for its geological formation and has been carefully surveyed and examined by hordes of geologists and volumes of interesting literature are carefully preserved in the archives of the Government of India. In addition to the enchanting ocean view, there is the backwater ride down a canal carved into the tremendous heights of the hills on either side. The vegetation on both sides of the channel, rising in height is a magnificent spectacle, it has given rise to a series of springs from which crystal clear water flows throughout the year. It is admitted that the water has medicinal properties that cure certain ailments. Even a single swim is a tonic that no traveler or visitor should miss.

In times of old, Lord Brahma came to earth to perform a Yaga (Fire Sacrifice). He did it in the present Varkala. He was so immersed in making Yaga that he forgot about the work of creating it. Lord Vishnu came to Varkala to remind Lord Brahma in the form of an old man. The brahmins who attended Lord Brahma received the old man and gave him food. But no matter what he ate, his hunger was not sated. Lord Brahma’s attendants went and told him. Then Lord Brahma could understand that the guest was Lord Vishnu himself. He immediately approached Lord Vishnu and found him trying to eat Aabhojanam. Lord Brahma then stopped Lord Vishnu from eating it and said, “Lord, if you eat it, then the final deluge will swallow this world.” Lord Vishnu then asked Lord Brahma to stop the Yaga and resume the work of creating it. He also showed her the ‘Viswaroopa’ of him. After this day, Sage Narada followed by Lord Vishnu was walking in the sky above Varkala. Lord Brahma who arrived there greeted Lord Vishnu. The nine Prajapathis to whom only the sage Narada was visible laughed at Lord Brahma. Because they thought Lord Brahma was greeting his own son Sage Narada. Then Lord Brahma corrected them. They felt sad for having committed a sinful act. Lord Brahma told them that the sage Narada would show them the proper place to pray for his redemption. Sage Narada threw the Valkala (deerskin) that he was wearing towards the earth. He fell into the present Varkala. The Prajapathis wanted a pool to make atonement. Sage Narada asked Lord Vishnu, who made a pond there, using his Chakra (wheel). The Prajapathis made Thapas there and were forgiven for their sins. It is believed that the ‘Devas’ built a temple of Lord Vishnu there and worshiped Lord Janardhana.

But this temple was left in ruins. At that time, several centuries ago, the then Pandya king was affected by a ghost. He made a pilgrimage but nowhere did he find any cure. When he arrived at the present Varkala, he saw the remains of the ruined temple by the sea. He prayed to the Lord saying that he would rebuild the temple there. The next day he had a dream. He told him that the next day he should go to the sea and stand near the ruined temple. He nearby he would see a huge amount of flowers floating in the sea and that if he searched there he would get an idol. He was instructed to make a hand of gold and attach it to the idol and build a temple around it. The current idol of Janardhana was retrieved from the sea by him. He built the temple and established the rules for the maintenance of the temple. The idol of Janardhana has Aabhojana in the right hand of him.

People believe that over the years this hand slowly rises. The day the idol can eat the aabhojana from his right hand, the world will face the great flood. There are small temples of Lord Shiva, Ganapathi, Sastha and Naga Devatha in this temple. The idol is always dressed in sandals and flowers, be it in the form of Janardhana, Narasimha, Venugopala or Mohini. Ashtami Rohini, the birthday of Lord Krishna, which comes in the month of Chingam (August-September) is celebrated here as a festival. On the south side of the temple two bells are attached. There is a story about that too. A Dutch ship was passing by and suddenly the ship refused to move despite all efforts. The people told the captain of the ship to tie a bell in the Janardhana temple. It seems that the captain and his assistant went ashore and tied the bells. As soon as the bells were tied, the ship began to move. The names inscribed on the bell are ‘Peter von Belson’ and ‘Michelle Evarald’. People believe that if the ancestors are worshiped in this temple, they would be pleased. Possibly because of this, the Janardhana is also called the Pithru Mokshakan.

Every year in the month of Meenam (March-April), a ten-day Arattu festival is held at the Janardhana Swamy Temple in the coastal city of Varkala in Kerala. The festival begins with a Kodiyettam flag-raising ceremony and ends with a procession of five decorated elephants through the streets. During the fourth and fifth days of the festival, the celebrations include all-night performances, such as the traditional Kathakali dance. The arattu (sacred bath) of the Lord takes place on the day of Uthram in the Arabian Sea at the rear of the temple. Along with this festival, the appearance days of the avatars of Lord Vishnu (for example: Rama Navami, Ashtami Rohini, Narasimha Jayanthi), Karkidaka vavu (Amavasya day in the month of Karkidakam, which comes in July or August) and Vaikuntha Ekadashi are also celebrated at the temple. Thiruvonam star days, Ekadashi and Thursdays are also considered important as according to popular custom these days are dedicated to Lord Vishnu.

The presiding deity of this temple is Sri Janarthana Swami. The deity stands facing east. His right hand is in position as if he is performing “Aachamanam”. His right hand is raised towards his mouth and the legends say that if his hand goes near his mouth the world will come to an end. It is believed to happen at the end of the Kali Yuga.

Offering obeisances to departed souls and ancestors is a very important ritual. The priest performs four poojas in one day. The head priest is a Brahmin from Tulu, who must not be a native of the place where the temple exists. The sub-deities are Ganapathi, Shastha, Ananthan (Nagam) Shiva, Chandikesha and Hanuman. A ten day festival with Arattu is held in the Malayalam month of Meenam on the day of Uthram.