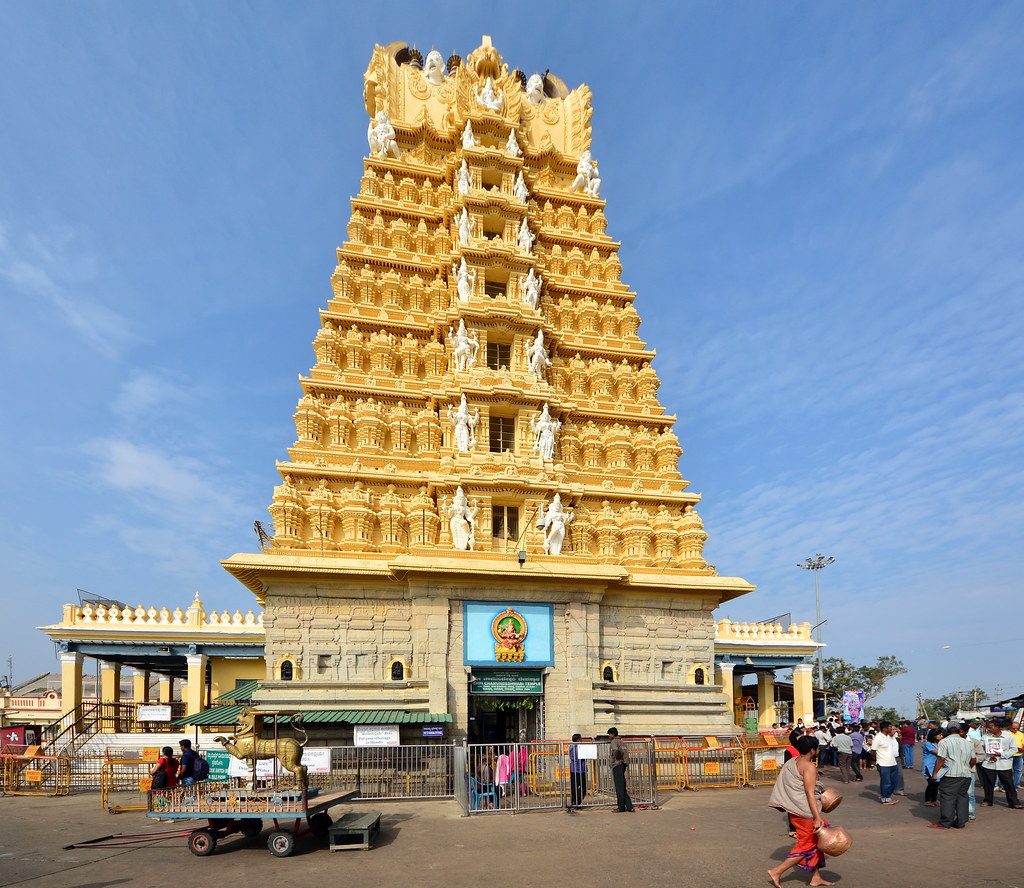 The Chamundeshwari Temple is a Hindu temple located on the top of the Chamundi Hills, about 13 km from the palatial city of Mysuru, in the state of Karnataka, in India. The temple is named after Chamundeshwari or, the fierce form of Shakti, a patron deity revered for centuries by the Maharaja of Mysuru.

Chamundeshwari is called by the people of Karnataka as Naada Devi, which means Goddess of the state. It is situated at an elevation of around 3,300 feet from mean sea level.

Goddess Durga is believed to have killed the demon king Mahishasura on top of this hill that he ruled over. Later the place became known as Mahishoru (Place of Mahisha). The British changed it to Mysore and then Kannadized in Mysuru.

The Chamundeshwari Temple is considered as a Shakti Peetha and one among the 18 Shakti Peetha. It is known as Krouncha Pitha as the region was known in Puranic times as Krouncha Puri. It is said that Sati’s hair fell here.

The original shrine is believed to have been built in the 12th century by the rulers of the Hoysala dynasty, while its tower was probably built by the rulers of the Vijayanagara Empire in the 17th century. In 1659, a thousand-step staircase was built leading to the top of the 3,000-foot hill. In the temple there are several images of Nandi (Shiva’s bull mount). There is a large granite Nandi on the 700 step of the hill opposite a small Shiva temple a short distance away. This Nandi is over 15 feet tall and 24 feet long and around her neck are exquisite bells.

The temple is famous for the celebrations of festivals like Ashada Shukravara, Navaratri and Ammanavara Vardhanthi. In the month of Ashadha, Fridays are considered particularly auspicious. Lakhs of devotees fill the temple during this occasion. Another festival celebrated during this month is Chamundi Jayanti. This day is celebrated on the anniversary of the consecration of the Utsava Moorti to the goddess by the Maharaja of Mysore. On this occasion, the idol of the goddess is paraded through the temple in a golden palanquin.
The most important festival celebrated here is Navaratri. Mysuru Dasara is celebrated as the state festival of Karnataka, called Nada habba in Kannada. During Navaratri, the idol is decorated in 9 different ways to represent the nine different aspects of the goddess known as Navadurgas. On the seventh day of Navaratri, which is dedicated to goddess Kalaratri, valuable jewelery donated by Maharajas from the Mysuru District Treasury is brought and given to the temple to decorate the idol.

Another temple is situated at the foot of the hill that is located at Utthanahalli, called Jwalamalini Sri Tripura Sundari Temple. This goddess is considered the sister of Chamundeshwari, who helped her on the battlefield to kill the demon Raktabīja.